CUSTOMER SATISFACTION SURVEY ON TNB SERVICES IN THE IMPLEMENTATION OF FEED-IN TARIFF (FiT) SYSTEMKAJIAN KEPUASAN PELANGGAN KE ATAS PERKHIDMATAN TNB DALAM PELAKSANAAN  SISTEM TARIF GALAKAN (FiT)Dear Sir/Madam,Universiti Tenaga Nasional (UNITEN) has been appointed by Tenaga Nasional Berhad (TNB) to measure customers’ satisfaction towards TNB services in the implementation of Feed-in-Tariff (FiT) System.
Attached is the softcopy of our survey questions. If you are familiar with the whole FiT system, kindly answer all sections.Therefore, we are conducting a survey with the aim of getting feedback from all parties involved in the implementation of FiT system i.e. the RE provider (FiAH), Consultants, and Service Providers.We strongly believe your input will help TNB  provides better service to their customers.However, if you are less familiar with the system, kindly answer  Section A, Section B15-B18 and Section E ONLY.To make it easier for you to answer the survey, we are using the word file. If you choose to answer the question through email,  below are the instructions:i-  Please type ‘X’ if the questions require you to choose one of the given options.
ii- For Likert-scale questions, please highlight the scale that you want to choose.
iii-If there is a need for you to type your reason/comments, please use the space provided.
iv-Once you have completed the survey, please save the file and email it toHayati@uniten.edu.myThank you again for your great support. If you have any query, do send an email to me.Download the Survey Form Here.Best regards.Dr. Norhayati Mat Husin
Project Leader
College of Business Management & Accounting
UNITEN
Posted by EcoSensa RFID at 17:12 No comments:
Email ThisBlogThis!Share to TwitterShare to FacebookShare to Pinterest

Posted by EcoSensa RFID at 17:05 No comments:
Email ThisBlogThis!Share to TwitterShare to FacebookShare to Pinterest

Next round of FiT quota allocation next month

NEXT ROUND OF FIT QUOTA ALLOCATION NEXT MONTH 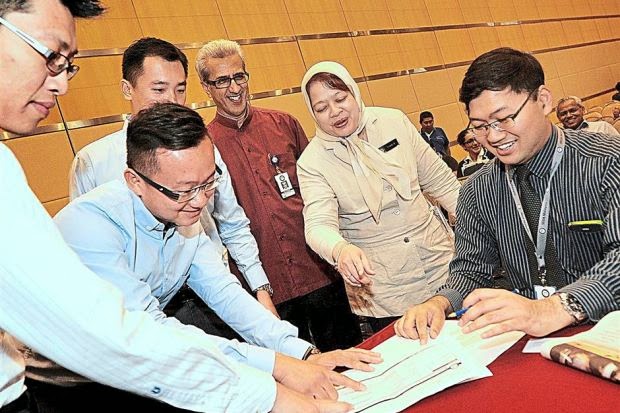 K.K.Kong of EcoSensa Technologies Sdn Bhd (1st from left), Badriyah (second from right) and Ali (3rd from right) with participants at a briefing yesterday.

PUTRAJAYA: The next round of feed-in-tariff (FiT) quota allocation for homeowners and small-scale renewable energy (RE) projects, that includes biogas and mini-hydro, will start from May 2.The Sustainable Energy Development Authority Malaysia (SEDA) will also allow, for the first time, community places such as schools, mosques, churches and welfare homes to apply for FiT quotas.
“We expect to receive about 100 applications from the community category,” Seda chief executive officer Datin Badriyah Abdul Malek told reporters on the sidelines of a briefing.Previously, this group had to compete for quotas in the commercial category.

Seda has allocated a quota of five megawatts this year for the community category, with maximum size of 24 kilowatts per site.
Seda is offering 65 MW in RE quota for 2014.
More than half of the allocation is reserved for solar. The four RE resources that are eligible for FiT are biogas, biomass, small hydropower and solar photovoltaic.
The FiT programme is funded by electricity consumers who contribute 1% of their total power bill towards the Renewable Energy Fund.
To improve efficiency, the fund plans to stop paying the additional 26 sen per kilowatt incentive that was previously enjoyed by homeowners who replaced their rooftops with special solar panels.
“Seda is seriously considering to totally remove this particular bonus for the installation of solar PV as building materials or also known as building integrated photovoltaic next year,” said chief operating officer Dr Ali Aska Sher Mohamad. 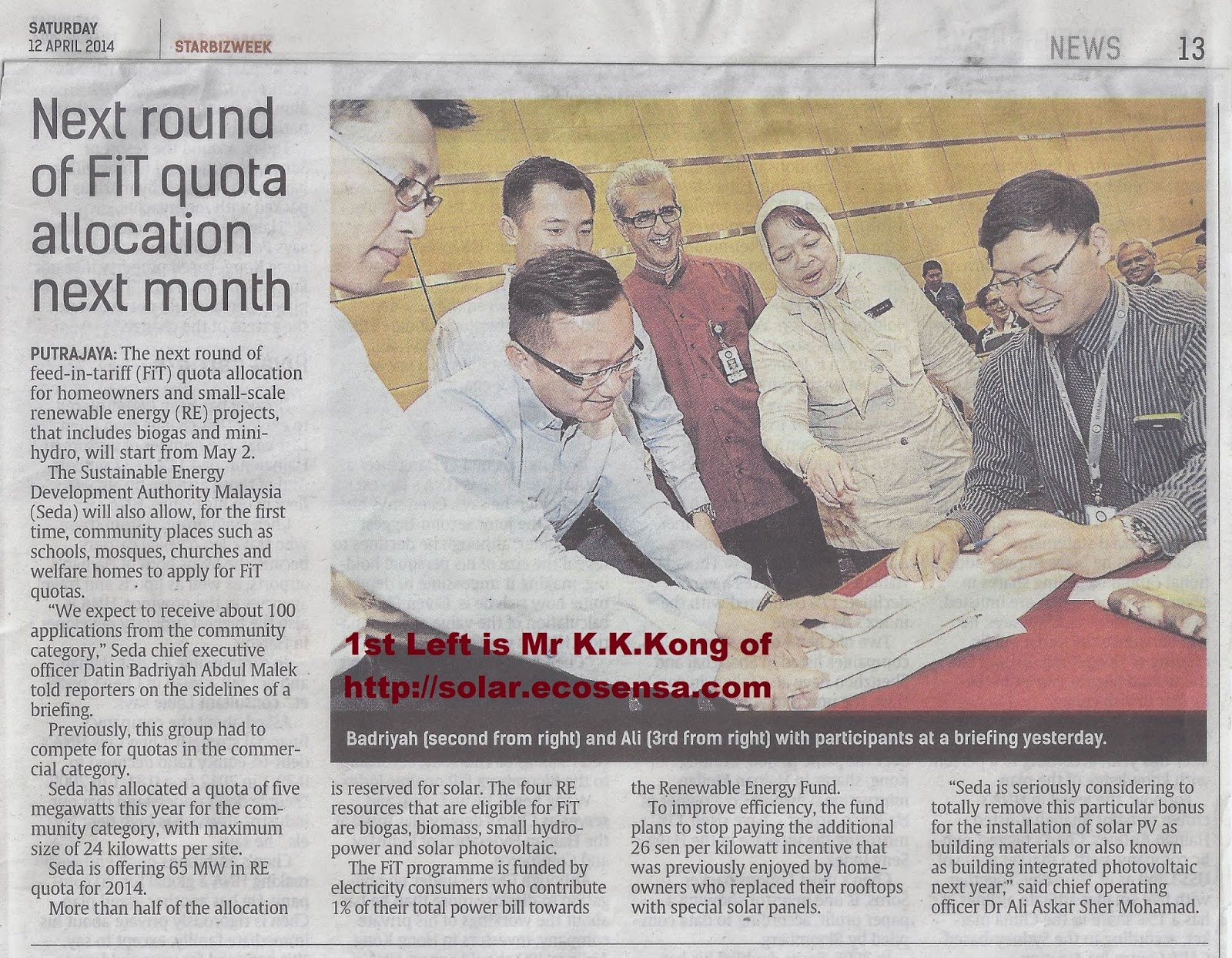 Construction : http://www.thestar.com.my/Business/Business-News/2014/04/12/Next-round-of-FiT-quota-allocation-next-month/ For more info, kindly email to “solar @ ecosensa.com” or visit http://solar.ecosensa.com
Posted by EcoSensa RFID at 08:36 No comments:
Email ThisBlogThis!Share to TwitterShare to FacebookShare to Pinterest 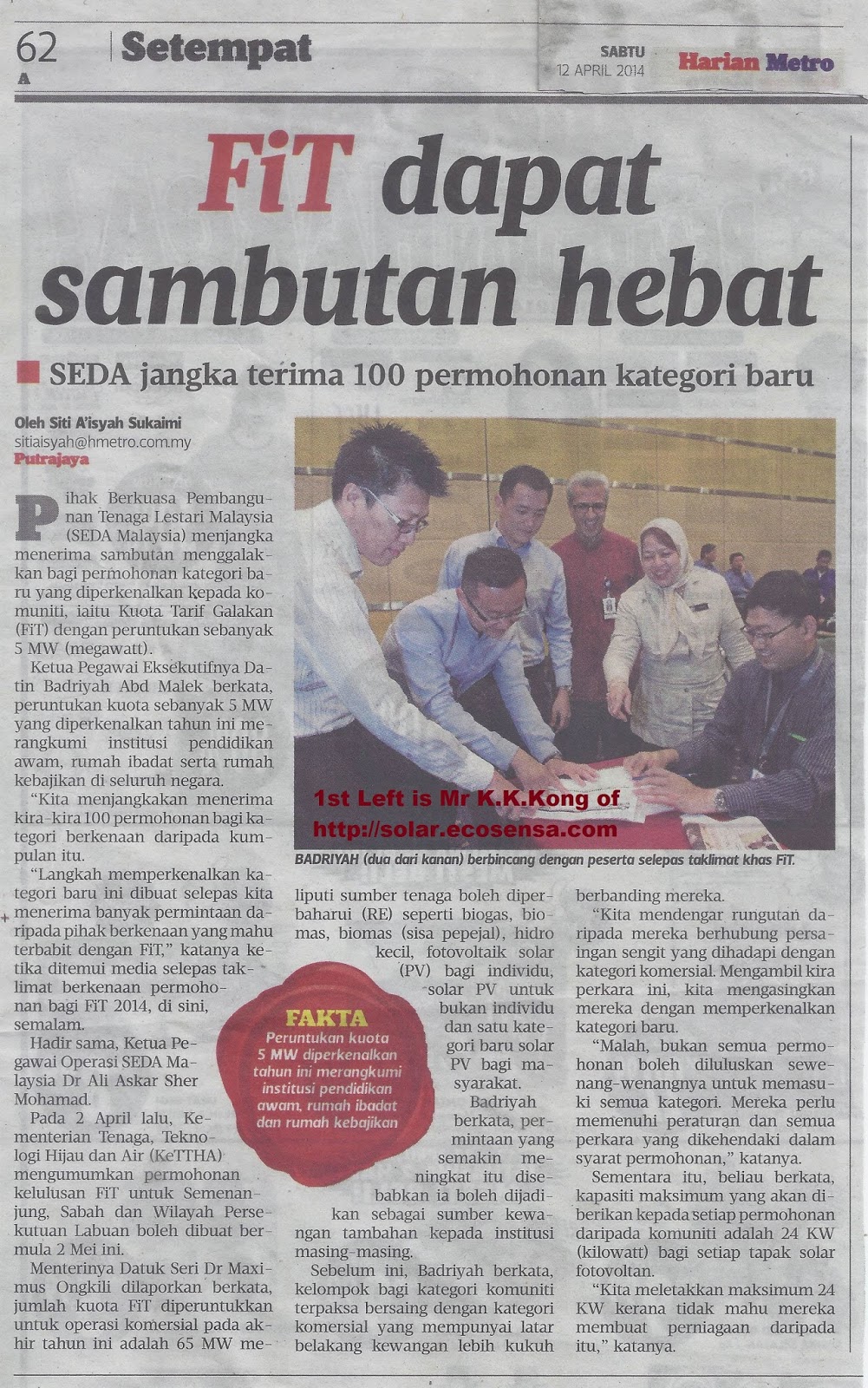 Posted by EcoSensa RFID at 08:28 No comments:
Email ThisBlogThis!Share to TwitterShare to FacebookShare to Pinterest 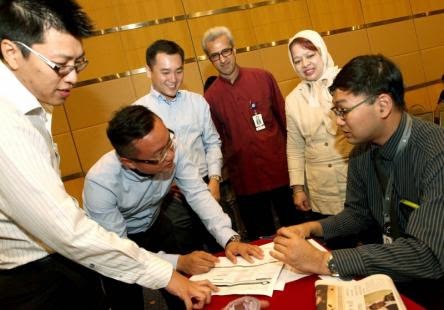 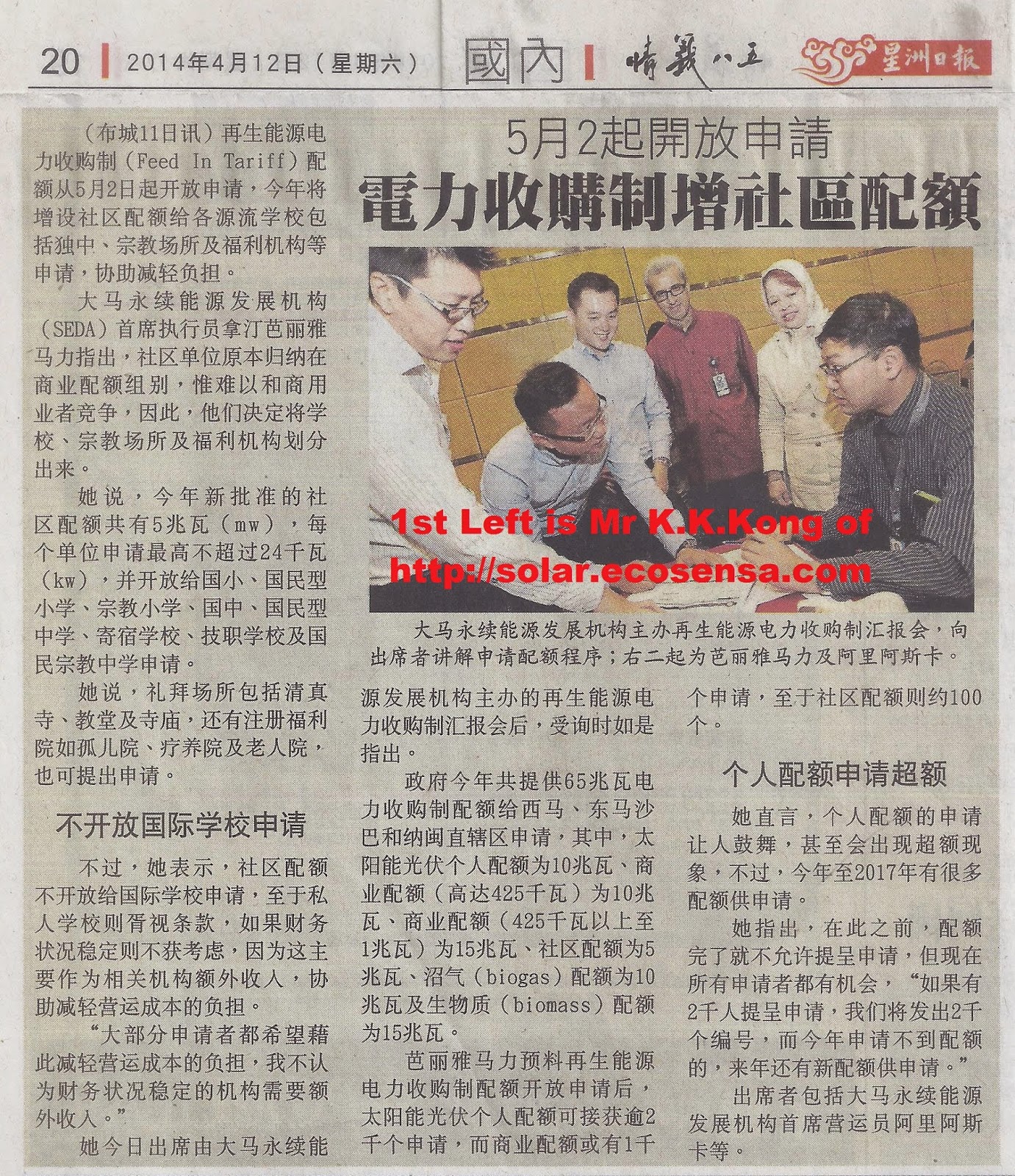 Posted by EcoSensa RFID at 08:14 No comments:
Email ThisBlogThis!Share to TwitterShare to FacebookShare to Pinterest

Published: Thursday April 3, 2014 MYT 12:00:00 AM
http://www.thestar.com.my/Business/Business-News/2014/04/03/Additional-65MW-of-RE-under-FiT-up-for-grabs-from-May-2/
PETALING JAYA: Come May 2, a quota of an additional 65MW of renewable energy (RE) will be up for grabs for parties wanting to produce this under the feed-in-tariff (FiT) programme for 2014. The quota for 2015 is being increased to 109MW.
This is according to a statement by Energy, Green Technology And Water Minister Datuk Seri Dr Maximus Ongkili, who said the quota release for 2014 marked an important milestone in the implementation of the FiT mechanism as Sabah and Labuan would be participating in the mechanism for the first time.
He reiterated that the RE sources that fall under the FiT include biogas, biomass, biomass (solid waste), small hydro and solar photovoltaics (PV).
Of the 65MW total RE quota of 2014, more than half of the allocation is for solar PV. Biogas and biomass would be allocated 10MW and 15MW respectively for 2014.
SEDA has also announced that the RE quota for 2016 will be 190MW while for 2017 it will be 196MW. Maximus added that projects under the FiT had generated 2% of the country’s total generating capacity.
This is based on 537.97MW of RE capacity approved under the FiT since 2010, compared with the country’s total electricity generating capacity of 27,179MW in the same period.
“Our target is for RE to constitute 5% of the energy mix in 2015,” said Maximus.
Meanwhile, further refinements have been made to the FiT quota application process for large-scale solar PV exceeding 425kW.
Application for this category must be submitted manually to Seda. The application must comply with all existing requirements under the e-FiT system as well as other conditions that will be disseminated by Seda through its website and stakeholders engagement workshops.
The minister said that as at end-February 2014, RM4.8mil has been paid out to biogas, RM4.86mil to small hydro, RM37.8mil to biomass and RM40.9mil to solar PV.
For more info, please call +60380791980 or email solar @ ecosensa.com or visit http://solar.ecosensa.com Malaysia Solar Company – EcoSensa Technologies Sdn Bhd
Posted by EcoSensa RFID at 18:46 No comments: